2 Answers
0 Vote Up Vote Down

Last Bible Study we had two very thought provoking questions.  One was regarding generations being punished by God for the sins of previous generations.  Or one could describe the principle this way; children are punished for the sins of their fathers.  While many Middle Eastern cultures practice punishing entire families or tribes for the sins of one of their members, even in the Old Testament God was clear that He did not expect His people to practice such injustice.  The God of the Bible speaks truth and justice into sinful cultures.  While there are differences in how the people of the Old Covenant functioned versus how His people now function under the New Covenant, the principle of each person suffering the consequences for his own sins is seen throughout all of Scripture.
Jeremiah 31: 29 “”In those days they shall no longer say: ‘The fathers have eaten sour grapes, and the children’s teeth are set on edge.’  “But everyone shall die for his own sin. Each man who eats sour grapes, his teeth shall be set on edge.”
Ezekiel 18: 20 “”The soul who sins shall die. The son shall not suffer for the iniquity of the father, nor does the father suffer for the iniquity of the son. The righteousness of the righteous shall be upon himself, and the wickedness of the wicked shall be upon himself.”
Romans 2: 6 “He will render to each one according to his works:”
Deuteronomy 24: 16 “Fathers shall not be put to death because of their children, nor shall children be put to death because of their fathers. Each one shall be put to death for his own sin.”

Here is what a couple of evangelical scholars say about the last verse.
“The Israelites were not to punish children for the crimes their parents committed. To do so charged them with guilt unjustly. “. . . it was a common thing among heathen nations—e.g., the Persians, Macedonians, and others—for the children and families of criminals to be also put to death (cf. Esther ix. 13, 14 . . .).”281  In the cases where God executed the families of criminals, He may have done so because the family members were also responsible for the crime (v. 16; cf. Josh. 7:24-26). In any case God has the right to do things that He does not allow His people to do. It is one thing for children to suffer physically and socially because of their parents’ sins (Exod. 20:5; Deut. 5:9). It is something else for human authorities to punish them for criminal acts that they have not committed.”—Dr. Thomas Constable

“A person shall be put to death for his own sin: God commands that each individual be responsible for their own sin; a father cannot be blamed and responsible for the sin of their (grown) children, and the children cannot be blamed and responsible for the sin of their parents. It is wrong for a parent to automatically blame themselves for their wayward children; though they may have a part in the problem, it isn’t always the case.
There are instances when God commands that a whole family be punished for sin, such as with the family of Achan in Joshua 7:16-26. When God deals with a whole family, it shows that there must have been some conspiracy between family members, for each is responsible for his own sin.”—David Guzik

So what are we to make of verses that speak of God visiting the iniquity of the fathers on the children to the third and fourth generation (Deuteronomy 5:9)?  The answer is that the affects of a father’s sin influence generations to come.  We see this today, in our culture, with the saying “the apple does not fall far from the tree.”  Generally speaking, the sins that a dad struggles with are often the one that his children struggle with.  This is sobering to think about.  A dad can influence generations to come with his sin and un-belief.  Yet, this is not some kind of mystical curse placed by God on children because of their fathers deeds.  God will continue to visit with his judgment each generation as they spurn the truth and continue in unbelief.  Here is the great truth, a Godly man is blessed by God and the affects of his life far outlast the affects of an unbelieving father.  Our God is good and gracious!
http://www.citylightchurchwb.org/blog/post/generational-curses–deuteronomy-5:9-

0 Vote Up Vote Down

What is a Generational Curse?
Our families have the greatest influence on our development, including the development of our patterns of sin. Some people even assert that family or generational curses are passed down along generational lines. The belief comes from Old Testament passages which say that God “punishes the children and their children for the sins of the fathers to the third and fourth generation” (Exodus 34:7). I will leave that discussion to biblical scholars.
A generational curse is passed down from one generation to another due to rebellion against God.  If your family line is marked by divorce, incest, poverty, anger or other ungodly patterns, you’re most likely under a generational curse.  The Bible says that these curses are tied to choices.  Deuteronomy 30:19 says we can either choose life and blessing or death and cursing.
Whether or not families inherit spiritual curses, it is obvious that patterns of sin are passed down through families. Everyone sins; but just as culture, ethnicity, and gender steer our patterns of sin in particular directions, so do our families.
We inherit many traits and preferences from our parents that aren’t always a positive influence on ourselves or others.  When we acquire a sinful habit or belief that negatively affects our lives or those around us, this is known as a generational curse.  It is the shadow side of behavior passed down through the generations but is it possible to break this cycle of suffering?
Generational Curses in the Bible
Based on texts taken out of context and used as pretexts it has become increasingly common for Christians to suppose that they are victims of generational curses. As such, they suppose they have inherited demons ranging from anger to alcoholism, from laziness to lust. Closer examination, however, demonstrates this notion to be seriously flawed.
Scripture clearly communicates that consequences – not curses – are passed on through the generations.
In this sense, the Bible says that children are punished for the sins of their fathers “to the third and fourth generation” (Exod.20:5).2 The children of alcoholic fathers frequently suffer neglect and abuse as a direct consequence of their father’s sinful behavior. Moreover, the descendants of those who hate God are likely to follow in the footsteps of their forefathers.
Scripture explicitly tells us that “the son will not share the guilt of the father, nor will the father share the guilt of the son”
(Ezek.18:20). Indeed, when ancient Israel quoted the proverb, “The fathers eat sour grapes, and the children’s teeth are set on edge” (Ezek.18:2), God responded in no uncertain terms: “As surely as I live, declares the Sovereign Lord, you will no longer quote this proverb in Israel….The soul who sins is the one who will die” (vv.3–4).
Finally, While the notion of generational curses is foreign to Scripture, there is a sense in which the curse of sin has been passed on from generation to generation. Through the first Adam, “all have sinned and fall short of the glory of God” (Rom.3:23). Through the second Adam—Jesus Christ—atonement is offered to all. Says Paul, “Just as the result of one trespass was condemnation for all men, so also the result of one act of righteousness was justification that brings life for all men” (Rom.5:18). Through no act of our own we are condemned; likewise, through no act of our own, we are saved (Rom.5:12–21).
— Hank Hanegraaff
Breaking the Generational Curse 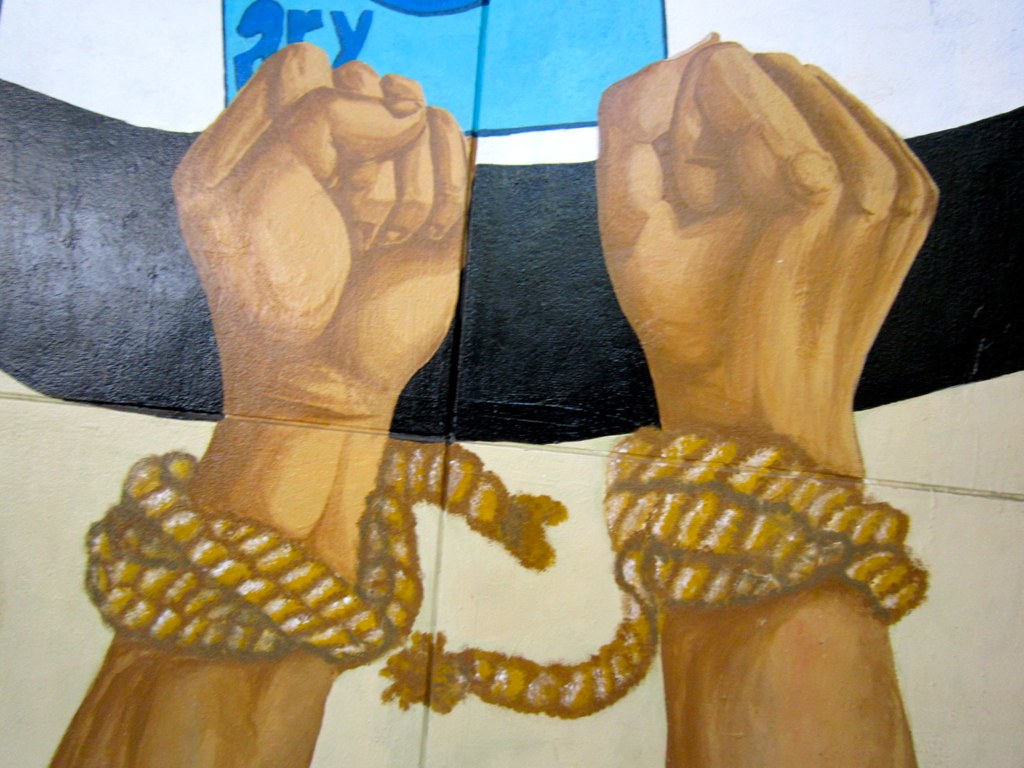 Maybe you’ve inherited a family curse or maybe the curse has begun with you. Either way, God has a plan for your freedom that will shatter the chains of that cycle forever! It will stop it in your life and stop it from passing on to your children!
The word of the Lord came to me again, saying, “What do you mean when you use this proverb concerning the land of Israel, saying: ‘The fathers have eaten sour grapes, and the children’s teeth are set on edge’? “As I live,” says the LORD GOD, “you shall no longer use this proverb in Israel. Behold, all souls are mine; the soul of the father as well as the soul of the son is mine” (Ezek.18:1-4).
You can be free! John 8:31-36 reminds us that as we abide in Jesus Christ, we receive His freedom. Not only has Jesus set us free from our sins, He has set us free from the penalty, the moral liability, and the ongoing curse of that sin! Jesus Christ is the Anointed One. That means He is the burden-removing, yoke-destroying power of God in our lives.
There’s going to come a time when the fathers may eat sour grapes, but the children’s teeth will not be set on edge when the curse will not be passed down from generation to generation. It doesn’t have to be “like father like son.” Through the shed blood of Jesus Christ, we have a new and better covenant with God the Father. Through Jesus’ blood, He forgives us our sin and delivers us from iniquity.
God has redeemed us from the curses being passed on from one generation to the next. This redemption comes as we understand that the root of our problems is in the spiritual realm. As we apply God’s Word and power to our lives, and we choose to walk in righteousness and obedience to God, the chains of bondage will be broken. The freedom we have longed for can become reality!